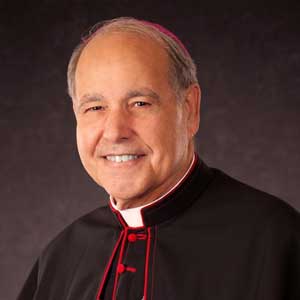 Bishop Estévez was born February 5, 1946 in Havana, Cuba and arrived in the United States on a Pedro Pan flight as a teenager. He was ordained in 1970 and has done extensive studies in Spiritual Theology, earning a doctorate from Gregorian University in Rome. He is fluent in English, Spanish, French and Italian.

From 2001 to 2003, Bishop Estévez served as spiritual director of Saint Vincent de Paul Regional Seminary in Boynton Beach, where he had served as rector from 1980 to 1986. He was pastor of Saint Agatha Parish in Miami for 14 years, while also directing the Campus Ministry at Florida International University.

Appointed Auxiliary Bishop on November 21, 2003, and ordained January 7, 2004, he oversees the archdiocese’s Ministry of Pastoral Services including family life, youth, campus, prison and Respect Life ministries, as well as all the apostolic movements.

In 2010, under the leadership of Archbishop Thomas Wenski Bishop Estévez was appointed Vicar General of the Archdiocese of Miami.He remained in that position until assuming his new role as Bishop of the Diocese of St. Augustine on June 2, 2011.