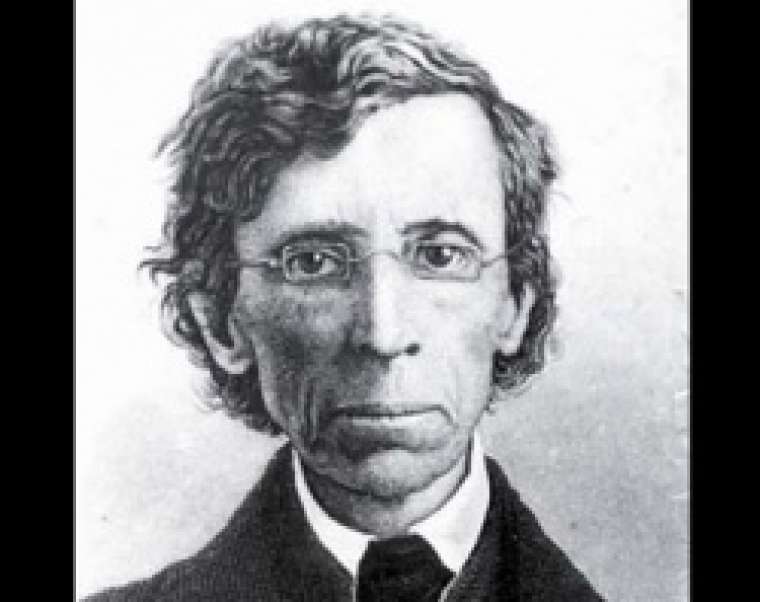 Félix Varela was born on November 20, 1788 in Habana, Cuba, then still part of New Spain, and grew up in St. Augustine, Florida.  The grandson of Lieutenant Bartolomé Morales, the commander of military forces in Spanish Florida, who was stationed there and who helped to raise Felix after the death of his mother in childbirth. As a teenager, he refused his grandfather’s offer to send him to a military academy in Spain, returning to Cuba, where he studied to become a priest at San Carlos and San Ambrosio Seminary in Havana, the only seminary in Cuba.  He also studied at the University of Havana. At the age of 23, he was ordained in the Cathedral of Havana for the Diocese of San Cristóbal de la Habana.

Joining the seminary faculty within a year of his ordination, he taught philosophy, physics, and chemistry. In his position there, he taught many illustrious Cubans, including José Antonio Saco, Domingo del Monte, José de la Luz y Caballero and Felipe Poey.  José Martí’s teacher, Rafael María de Mendive, was also Varela’s student. During this period, Varela established a literary society and published Miscelánea filosófica, a popular book on philosophy, before he was 30 years old.

In 1821, Varela was chosen to represent Cuba in the Cortes Generales of Spain in Madrid, where he joined in a petition to the Crown for the independence of Latin America, and also published an essay which argued for the abolition of slavery in Cuba. For such ideas, after the French invasion of Spain in 1823 overthrew the liberal government of Spain and restored King Ferdinand VII who then brutally suppressed all opposition, he was sentenced to death by the government. Before he could be arrested, however, he fled, first to Gibraltar, then to the United States, where he spent the rest of his life, settling in New York City.

In New York, Varela founded El Habanero, the first Spanish-language newspaper in the United States, though it produced only seven issues. He published other newspapers in Spanish, including El Mensajero Semanal, and also in English The Protestant’s Abridger and Annotator. He published many articles about human rights, as well as multiple essays on religious tolerance, cooperation between the English and Spanish-speaking communities, and the importance of education.

After spending some months studying English, he served as an assistant at St. Peter’s Church on Barclay Street from 1825 to 1827.  In 1827, Varela founded the Church of the Immigrant in the poor Five Points neighborhood of Manhattan. The area later became known as Chinatown and the congregation as the Church of the Transfiguration. It continues to serve a largely immigrant community, and it houses a memorial to Varela.

In 1837, Varela was named Vicar General of the Diocese of New York, which then covered all of New York State and the northern half of New Jersey. In this post, he played a major role in the way the American Church dealt with the tremendous influx of Irish refugees, which was just beginning at the time. His desire to assist those in need coupled with his gift for languages allowed him to master the Irish language in order to communicate more efficiently with many of the recent Irish arrivals.

Varela served as a theological consultant to the committee of American bishops which drew up the famous Baltimore Catechism, which began a standard teaching tool for Catholic children in the nation until the mid-20th century. He was later awarded a doctorate of Theology by St. Mary’s Seminary in Baltimore, Maryland.

In 1848, worn out by his labors, Varela developed severe asthma, which led him to retire to St. Augustine, dying there five years later. Nearly sixty years after his death, Varela’s body was dis-interred from Tolomato Cemetery and returned to Cuba to be laid to rest in the University of Havana’s Aula Magna.

His name is associated with a project proposed by the Christian Liberation Movement in Cuba, named Proyecto Varela, which was announced to the Cuban people on government-owned TV and radio stations in Cuba by United States President Jimmy Carter. In 1997 the United States Postal Service honored Varela by issuing a 32-cent commemorative stamp.

Currently, Varela is being considered for canonization as a Catholic saint, and was declared a Servant of God, recognizing his life as a devoted Catholic and a model for others in and out of the faith, and officially beginning the process.

On Easter Sunday, April 8, 2012, both the Archdiocese of New York and the Archdiocese of Miami (each having significant Catholic Cuban-American populations) announced that the Vatican’s Sacred Congregation for the Causes of Saints had declared Varela “Venerable”, meaning he lived a virtuous life within the Catholic faith to a heroic degree and as such is worthy of praise (veneration).

Now, for him to be beatified, the next stage of the process, since he is not a martyr, a miracle (officially deemed to be so from an impartial theological and scientific point of view) must be proved attributable to his direct intercession. Canonization would then follow if another such miracle is declared to have occurred after the first. If canonized, he would be the first Cuban-born person to be honored on the altars of the Catholic church.