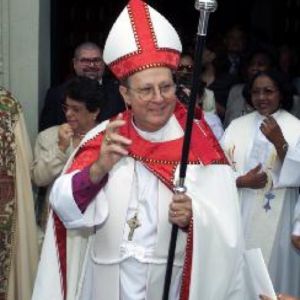 Episcopalian Bishop Leo Frade was born in Havana, Cuba, on October 10, 1943. He grew up in a staunchly Methodist home. As a teenager at a youth conference he felt a strong call to serve God, and was for a time a lay missionary in the Sierra Maestra Mountains where Castro’s revolution began.

In 1960 the church sent him to Asbury College, a Methodist-affiliated school in Kentucky. His civil rights activism cost him the scholarship at the end of his junior year, and he went to work in New York, where his family was then living. It was during this time that he found the Episcopal Church and claims that his “conversion” took place during an Easter Sunday service at the Cathedral of St. John the Divine in New York City.

In 1969, the year that the Diocese of Southeast Florida was formed, he moved to Miami, where he continued his journey as a layman in the Episcopal Church. He worked as a General Sales Manager for an international cargo airline. In Miami he attended Biscayne College, today’s St. Thomas University. He was prepared for confirmation by Bishop Leo Alard, presented by Canon Max Salvador and confirmed by Bishop Ervine Swift. After a few years his vocation was renewed and he went to the School of Theology of the University of the South, Sewanee, TN where he received his Master of Divinity degree.

He was ordained to the diaconate and the priesthood in Miami by Bishop James Duncan. His first parish was Holy Cross in Miami. He also served churches in New Orleans, La., and Orlando, Fla.

He was consecrated Bishop of Honduras on January 25, 1984 and for almost 17 years he helped to grow the diocese, making it the fastest growing diocese in the Episcopal Church at the time. He was involved in social and justice issues as well as a strong commitment to evangelism.

He has served as a member of the Executive Council of the Episcopal Church, as well on various committees and commissions. He currently serves as a member of the Standing Commission on World Mission. He is now the senior bishop with jurisdiction of the House of Bishops.

Frade was elected Bishop of Southeast Florida on May 6, 2000, and enthroned on September 16, 2000. His commitment to evangelism and mission is challenging all in the diocese to double membership during the next decade. He is known as a powerful preacher and a gentle and caring pastor of his flock.

The bishop is married to the former Diana Dillenberger, founder and director of Our Little Roses, a home for abandoned, abused and orphaned girls in San Pedro Sula, Honduras. The couple has four adult children and five grandchildren.