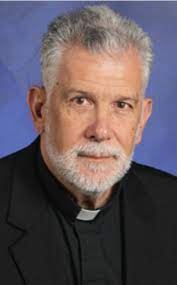 Father José Luis Menéndez was born in Havana.  His family was well known because of their H. Upmann cigar enterprises. After the Castro revolution took control of Cuba, they left Cuba for Spain. José Luis education was received in that country. He decided to follow a religious vocation and after his graduation from seminary studies was ordained as a priest. His ordination took place in Madrid.

In 1980 he started a successful career as a priest in the Miami Archdiocese. After serving in St. Mary’s Cathedral in Miami he was assigned responsibilities as a priest at the Miami Shrine of Nuestra Señora de la Caridad del Cobre (Ermita de la Caridad) and also at the La Salle High School. From 1982 to 1988 he also served as director of Pastoral Ministries for the Archdiocese of Miami.

In 1988 Father became the pastor of Corpus Christi Catholic Church in Miami, developing ministries among all the different ethnic groups in the areas. He was able to start a mission with regular Sunday masses for the large Dominican population in Wynwood and surrounding areas.  He has been one of the best-known Cuban clergymen in South Florida and among Hispanics in the United States.

He is the founder and director of Museo Colonial de la Florida (Florida Cultural Museum). Through his efforts visitors to Miami can also enjoy one of the largest collections of Peruvian colonial religious art to be found anywhere.

His ecumenical and Interfaith activities have been honored by all religious denominations. He has supported different activities in favor of the defense of human rights in his native country.

The government of Peru conferred upon him the Order of Merit (Orden del Mérito) and the King of Spain honored him with a prestigious medal, La Orden de Isabel la Católica. It is not possible to describe religious and cultural work in the Cuban and Hispanic communities without the outstanding work of Father José Luis Menéndez.