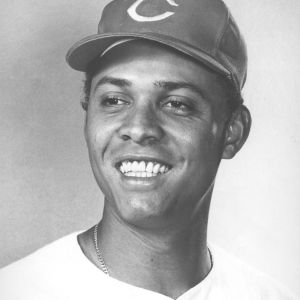 Atanacio “Tony” Pérez Rigal was bornin Ciego de Avila, Cuba on May 14, 1942. He is a Cuban-American former professional baseball player, manager and a member of the Baseball Hall of Fame. He played as a first baseman and third baseman in Major League Baseball, most notably for the Cincinnati Reds. Variously nicknamed “Big Dog,” “Big Doggie,” “Doggie,” and “The Mayor of Riverfront”, the slugging seven-time All-Star earned two World Series rings during a twenty-three year playing career, and one World Series ring as a coach.

Along with fellow stars Pete Rose and Johnny Bench, Pérez was a key member of Cincinnati’s celebrated “Big Red Machine”. He played for the Reds from 1964-76), for the Montreal Expos from 1977–79, Boston Red Sox from 1980–82 and Philadelphia Phillies in 1983 before returning to Cincinnati for his final three seasons from 1984 to 1986.

After retiring, Pérez went on to coach and later manage the Reds and the Florida Marlins. From 1993 through the 2017 season, he was Special Assistant to the General Manager with the Marlins.

He was elected to the Baseball Hall of Fame in 2000.