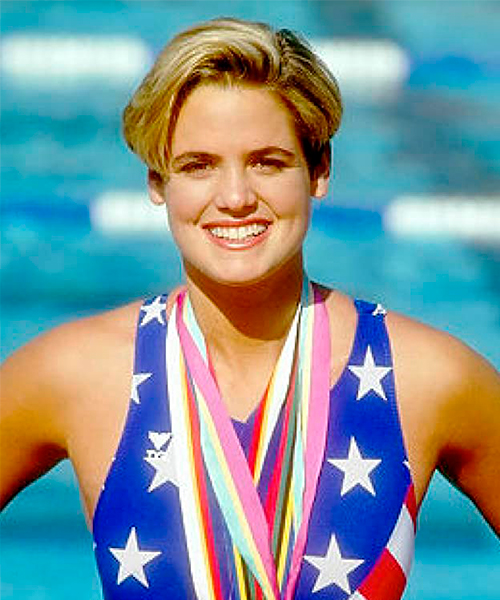 Dara Torres was born on April 15, 1967, the daughter of Edward Torres (originally from Cuba) and Marylu Kauder.

She is an American former competitive swimmer, who is a 12-time Olympic medalist and former world record-holder in three events. Torres is the first swimmer to represent the United States in five Olympic Games (1984, 1988, 1992, 2000 and 2008), and at age 41, the oldest swimmer to earn a place on the U.S. Olympic team. At the 2008 Summer Olympics, she competed in the 50-meter freestyle, 4×100-meter medley relay, and 4×100-meter freestyle relay, and won silver medals in all three events.

Torres has worked in television as a reporter and announcer for American networks NBC, ESPN, TNT, OLN, and Fox News Channel, and hosted the golf show, The Clubhouse on the Resort Sports Network.  She has also worked as a model, and was the first elite swimmer to model swimwear in the Sports Illustrated Swimsuit Issue, appearing in the 1994 edition.

She is a veteran celebrity swimmer for Swim Across America, a charitable organization that raises funds for cancer research in which she has participated for several years. She is the author of two books: Age is Just a Number: Achieve Your Dreams at Any Stage in Your Life (with Elizabeth Weil), and Gold Medal Fitness: A Revolutionary 5-Week Program (with Billie Fitzpatrick).  Torres is also involved with the American chapter of the foundation of Princess Charlene of Monaco, a charitable organization at which she sits, as Vice-President, on the board of directors.