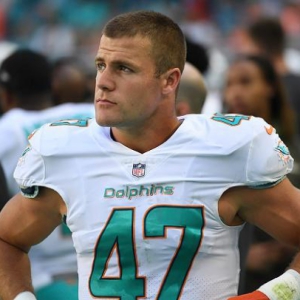 Kristian “Kiko” Alonso was born in Newton, Massachusetts in 1990 to a Cuban father and a Colombian mother.  He began playing college football in Oregon and was quickly drafted by the Buffalo Bills in the second round of the 2013 NFL Draft.  During his time with the Bills, Kiko was named the NFL Defensive Rookie of the Month for September.  He was then traded to the Philadelphia Eagles on March 2015.

In 2016, the Eagles traded Alonso to the Miami Dolphins.  The South Florida team named him the starting middle linebacker to kick off the 2016 season.  He started 15 games with 115 total tackles, 2 interceptions and a defensive touchdown.  On March 21st, 2017, Alonso signed a four-year, $28.9 million contract with the Dolphins through the 2020 season.

Kiko has become one of the most popular Dolphin players in Miami and often makes reference to his Cuban and Colombian roots.  In fact, he popularly goes by the nickname “El Bravo”.