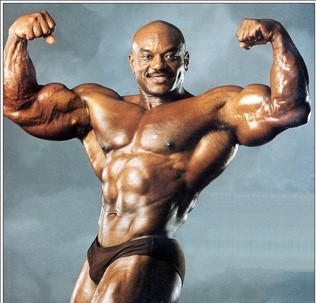 Sergio Oliva was born on July 4, 1941 in Guantanamo, Cuba.  He was a Cuban bodybuilder known as “The Myth.”

In 1962, Oliva took second place in Cuba’s National Weightlifting Championship.  However, when first-placed Alberto Rey Games Hernandez became injured, Oliva was chosen to represent Cuba at the 1962 Central American and Caribbean Games hosted in Kingston, Jamaica. During his stay in Jamaica, Oliva escaped from Cuban guards and demanded political asylum in the American consulate. Soon, 65 other Cuban nationals followed him, including Castro’s entire weightlifting team and their security guards.

In 1963 Oliva moved to Chicago, Illinois. There he worked at a local steel mill and began working out at the Duncan YMCA. Oliva won his first bodybuilding competition, the Mr. Chicagoland contest, in 1963. He was successful again at the Mr. Illinois in 1964, but he lost in 1965 at the AAU Mr. America, winning 2nd place even though he won the trophy for “Most Muscular.” In 1966, he won the AAU Jr. Mr. America, and lost at the AAU Mr. America again taking 2nd place although once again he claimed the trophy for “Most Muscular”. He then joined the International Federation of BodyBuilders IFBB in which he won both the professional Mr. World and Mr. Universe Contests. In 1967, he won the prestigious Mr. Olympia contest.

He went on to win the Mr. Olympia title three years in a row, at 5 feet 10 inches and at a contest weight of 225-245lbs. Oliva’s 1968 Mr. Olympia win was uncontested. In 1969, he won his third consecutive Mr. Olympia by beating a Mr. Europe, a Mr. International, and four-time Mr. Universe winner Arnold Schwarzenegger.  During his career he won 20 first place bodybuilding titles.